Did you know you can see the blog history??

Mark this link in your favorites... http://crosstimbersdistrict.blogspot.com/

You can also get there by selecting the view on blog link at the bottom of each section.

If you need something added to the district site please contact robert.blake@bitxbit.com.
Posted by Unknown at August 16, 2011 No comments: 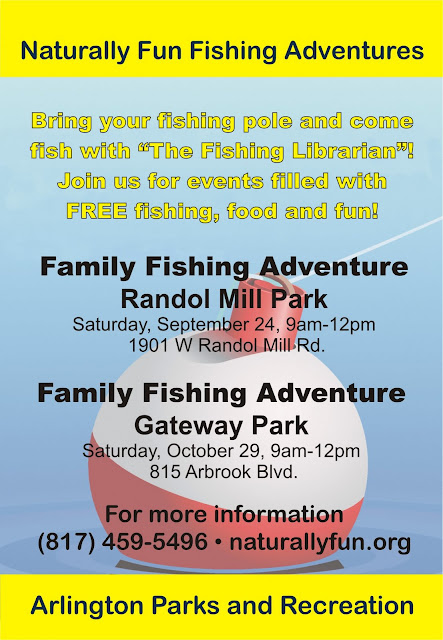 Leave No Trace is an important program for our packs and troops.
I took the course back in February. There is another session coming up.
Let's get an email out right away and see if anyone in the district is interested. Spots fill up quickly.

Who: Scouts or other outdoor enthusiasts interested in learning the principles of Leave No Trace.


Gear: Personal camping gear, watch, digital camera (if you have one) dunk bag with dishes

Let's also let everyone know that this is now an official position, and even has a patch for LNT Trainer:
http://www.boyscouttrail.com/blog/453.asp

Email ThisBlogThis!Share to TwitterShare to FacebookShare to Pinterest
Labels: Training

The Drug Enforcement Administration (DEA) created a Red Ribbon Week patch to encourage and support scouts who wish to learn about Red Ribbon and participate in local efforts to educate youth about the dangers of drug abuse.

Red Ribbon Week was established in memory of the sacrifices made to help keep our communities drug free and encourage youth to lead healthy lives free of drugs. Observed annually from October 23 to October 31st, Red Ribbon Week is a national celebration promoting youth education on the dangers of substance abuse.

-The Scout leader MUST submit the 'Intent to Participate' form by Friday, October 7, 2011. The online form is available at www.justthinktwice.com

-Each Scout must attend a drug prevention education session.

- Each Scouting unit or troop must sponsor a Red Ribbon Week activity.

-Each Scout must take a drug-free pledge.

-The Scout leaders must submit the 'Activity Report' upon completion of all program requirements no later than Friday, November 18, 2011. 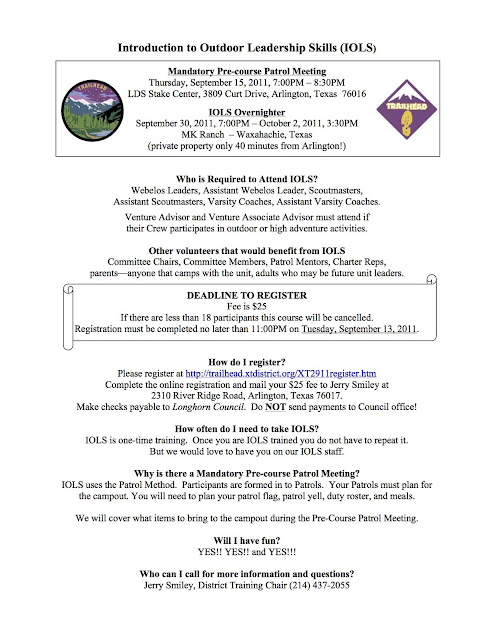 On August 20th officials of the Boy Scouts of America and the National Rifle Association of America will open a new exhibit at the National Scouting Museum located at BSA's National Headquarters in Irving, Texas. The exhibit,A Century of Marksmanship, coincides with the 100th anniversary of Scouting and the partnership BSA & NRA formed in 1910 to provide Scouts with a safe and fun environment to learn and participate in the shooting sports.

The exhibit contains photographs, firearms, merit badge books and patches from the 100 year history of the Marksmanship Merit Badge. Numerous firearms commissioned to commemorate Scouting are exhibited, having been generously donated by Remington & Henry Repeating Firearms. Graphic images were also generously supplied by Boy's Life Magazine and the members of the Remington Society of America.

From BSA's founding in 1910, the shooting sports have been an exciting part of the Scouting experience. "Marksman" was one of the first 14 Badges of Merit offered in the original 1910 Scout Handbook. It is estimated that currently 20,000 badges each of Rifle Shooting and Shotgun Shooting are earned annually by Scouts.

Since 1910, of the millions of boys who have proudly worn the BSA uniform, many have had the opportunity to handle and shoot their first gun during a Scouting sponsored event.

The exhibit is a cooperative effort between the staff's of the National Scouting Museum and the NRA's National Firearms Museum. It was generously funded by the NRA Foundation through the philanthropy of George S. Rich of Maryland. 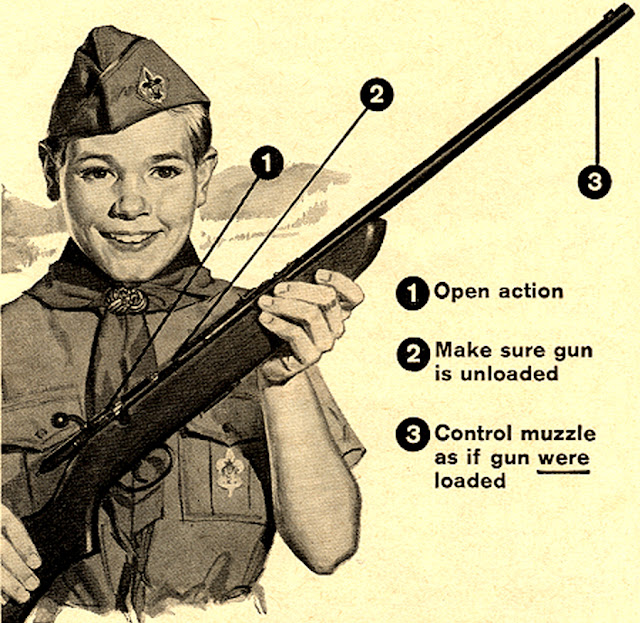 Order of the Arrow

Hello, Arrowmen!
Well, summer is almost over - hope you've had a great one!  Hope you enjoyed Summer Camp, Wood Badge, Twin Arrows, Philmont, Sea Base, OA Indian Summer, family vaction, visit to grandma and grandpa - everything!!
I want to let you know about a few OA events coming up for the next couple of months:
Again, our chapter, the Talahi Chapter, meets the 3rd Tuesday of each month at 7:30 p.m., at the Elks Lodge, located at 601 W. Pioneer Pkwy, Arlington, TX 76010.   We are meeting at 7:30 pm on Tuesday, August 16, 2011.  The chapter officers and I would like to invite all Arrowmen to attend our meeting.  If you're a regular attendee, it will be great to see you again.  If you haven't been to a meeting in a while, please come and reconnect with the Order of the Arrow - we've missed you!
Hope to see you at some or all of these events!!!
Yours in Brotherhood,
Gary Faletti
Talahi Chapter Adviser
talahiadviseroa@earthlink.net
Yours in scouting 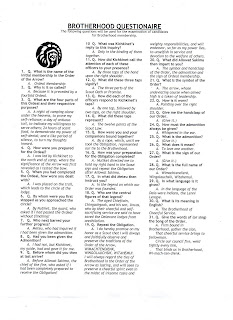 I am inviting you to attend the Longhorn Council's College of Commissioner Science on Saturday, August 6, at Texas Christian University. The cost is $20 for a whole day of incredible training opportunities and lunch, featuring BBQ from Michael Bay's Cowboy Catering.

Longhorn Council's new Scout Executive, John Coyle, will speak at the opening ceremony. Then you have more than 45 courses available to you! Attached is the course catalog, and the link to register is at the end of this e-mail.

You don't have to be a commissioner to attend Longhorn Council's College of Commissioner Science (although I think you would make a great one). We have courses that are perfect for incoming unit leaders, with a learning track for unit leaders that includes courses about:

· Unit Annual Planning
· Unit Finance
· Unit Action Plans
· Recruiting New Members
· The Journey to Excellence Award
· Unit Websites
· BSA's New "Mandatory Training Requirement"
· Methods of Scouting
· History of Scouting
· Successful "Webelos-to-Scout" Transitions
· BSA's Online Advancement System (and why each unit should use it even if they use other advancement software like TroopMaster or PackMaster).

Feel free to share this e-mail with other Scouters you think might be interested. Even Scouters who have attended before should look at coming back. There are some new offerings at this year's College of Commissioner Science. Come learn about:

· BSA's new "mandatory training requirements."
· What you need to know about the Journey to Excellence Award.
· Maximizing your unit's online web presence.
· How to utilize BSA's online advancement, even if you use another advancement program like TroopMaster or PackMaster.

Sign up today for the College of Commissioner's Science at the InteliScout website:
http://inteliscout.com/
Or, you can come register at 8:30 a.m. on the day of training.

I hope to see you there!

Kent Anderson
kent.anderson@sbcglobal.net
Posted by Unknown at August 01, 2011 No comments:

Spanish Speaking Help Need on the morning of August 20th.

Members of the Cross Timbers District,

We have been asked by the Junior League of Arlington to be part of their Back to School Fair on Saturday August 20th 8am-Noon. We are in need individuals Boy Scout age youth and Adults who would be available to help pass out scouting information. We are also in need of people who could help translate during this time If you are interested please let use know by either e-mailing Steve or Kelsey.

This is a reminder that BALOO is this upcoming weekend (LDS Stake Center, 3809 Curt Dr, Arlington, TX 76016). I need to buy our food on Thursday, so if you have not already done so, please send me a check for $10. It should be made out to Longhorn Council, but mailed to 2310 River Ridge Rd, Arlington, TX 76107. A few of you have already sent me checks, but one was made out to me and the other was made out the XT District. I can cash the one to me and throw in the cash, but I cannot do anything with the XT District check. I can accept cash on Saturday morning, but I need a firm commitment.

Speaking of Saturday, please be there no later than 8:00 a.m. A light breakfast (fruit, muffins, etc.) will be provided. Water and juice will be provided, but because we are in an LDS facility, we cannot make coffee or tea there. However, you may bring your own. We will be outside briefly to view model campsites and cook lunch, so wear something cool. Uniforms are encouraged, but not required.

If you have friends that want register, the deadline is Thursday noon. No walk-ins will be allowed!

Let me know if you have any other questions.

Thanks - I look forward to seeing you all.

Jerry Smiley
Posted by Unknown at August 01, 2011 No comments:

How is COVID-19 (Coronavirus) impacting Scouting at Longhorn Council? Please read this importa... 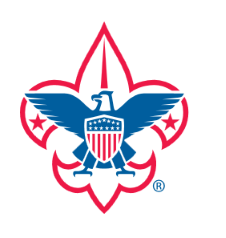